Unable to remove device from Scene Management - Back Home

I have one device configured to my Back Home Scene. This is what I believe Yeelight is calling Smart Scene. I need to remove the device because I think its causing issues. Unfortunately, when I uncheck the device in Edit Scene Management, the Save button disappears. Does anybody know of a fix?

The app doesn’t support delete/clear pre-install scene yet, will add it in next release.

It should be an App bug. If you unselect all the bulb, you can’t save it…

@sartau I can’t reproduce the problem you described.

Could you show me your smart scene management page? 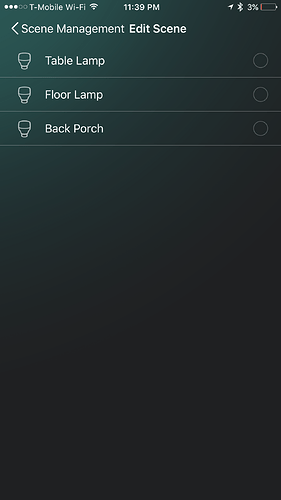 what exactly does scene management do? does it automaticaly do certain things when i leave home for leave home setting and such? and how does it know you are leaving home?

I’d like to add to this. After setting up the scenes it does seem a bit of a pain to apply them if that’s the only way to do it. Can anyone from yeelight enlighten me?

You can capture a snapshot of the devices you want and save it to the cloud, so you don’t need to adjust the device one by one if you have set up a scene, such as, “back home”/“Movie time”, you can set up a scene by one command.